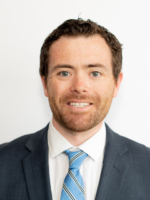 Dave Marr, Jr. is Vice President and General Manager, Marr Crane & Rigging. He is responsible for overall management of day-to-day activities and office/field personnel for crane, rigging and elevator divisions. Dave has worked at Marr since 2009 after completing his undergraduate studies at Bates College in Maine.

When describing his professional goals, Dave says he wants “to develop and evolve Marr Crane & Rigging into the industry leader for Cranes, Rigging, and Construction Elevators in Eastern Massachusetts.”

Dave lives in the South End of Boston with his wife and their dog. He enjoys gardening, hiking, and travelling when not at work.