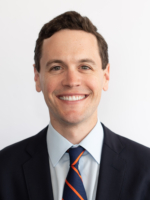 Jeff Marr, Jr. is Vice President, Business Development at Marr Scaffolding Company. He works with management, sales teams across all Marr companies and divisions, operations and Marr’s broad customer base to strengthen partnerships and to develop growth opportunities for the business. Previously, Jeff served as Aerial Lift & Swing Stage sales representative/project manager (Boston/Cambridge) for Marr Scaffolding Company. He has worked at Marr since 2008.

Jeff’s favorite part about working at Marr is having the opportunity to interact with the city of Boston in a way few would think possible. According to him, “A Marr hard hat is a backstage pass to Boston!”

As for his professional goals, Jeff says he aims “To have multiple defining moments. To never stop learning. To make an impact on Boston.”

Additional interesting facts from Jeff: “My favorite hobby is reading history in an effort to better appreciate and contextualize today. That, and rooting on the BC Eagles and Red Sox.”