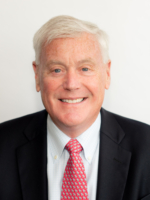 Jeffrey T. Marr is the Vice President of Marr Scaffolding Company. Jeff is responsible for the sales, rentals and operations for the company. He also supervises the management of branch and all warehouse operations. Jeff joined Marr in 1977.

Jeff’s most enjoyable experience working at Marr was the expansion of the company in the 80s and 90s, which included the acquisition of new warehousing and equipment lines, as well as the addition of new personnel. More recently, working with his two children, Jeff Jr. and Katherine, have taken over the “favorite” position.