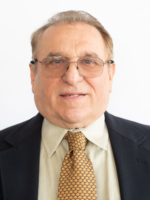 Louie “Lou” Giunta is the Vice President of Isaac Blair & Co. He is responsible for initiating project management of all projects; evaluating and predicting the scope of work including engineering and design; appraising and estimating total cost of projects; serving as liaison between General Contractor and engineer, as well as chief coordinator and communicator to field leadership; assisting in trouble-shooting and problem-solving during the duration of projects; overseeing all necessary inspections; acting as chief coordinator during emergency response work; and being in contact with customers and expanding the growing customer base. Lou has been with Marr since 1968, first working as General Manager of Saf-Lok Scaffolding.

Lou’s favorite part about working at Marr has been feeling as though he’s among his extended family. “I have been very lucky to have worked with and still work with some of the most amazing people, many of whom are my good friends,” he says.

Lou’s personal goal is to to be the best grandfather he can be to his six grandchildren. “When I was younger, it didn’t really occur to me how fast time would go, and now my kids are parents,” he says. “I am blessed to have the chance to do things with them that I may have not done with my kids when they were small.”

As for his professional goal, Lou says, “With the help of a great team, I have been able to put the Isaac Blair Company on a course that has risen to a point where we have set a standard of integrity and professionalism in the industry. My goal is to continue to maintain that status as long as I am Vice President. A wise old friend once told me, ‘When you stop, you rust.’ So at my age I have no desire to retire because working keeps me feeling young.

Additional interesting facts from Lou: “My first language is Italian. I am an aviculture and exhibitor of the English Budgerigar. I enjoy Karaoke and sing a mean rendition of ‘My Way’!”