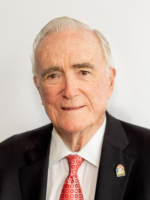 Robert “Bob” Marr is Chairman of the Board of The Marr Companies. Bob joined Marr in 1960 and his many years of experience make him well suited to assist the fifth generation ownership in securing the future of the companies. Previously, he served as a Lieutenant (junior grade) in the U.S. Navy, stationed at Great Lakes, IL.

Bob’s favorite experience at Marr has been introducing new methods and equipment to the industry. Also, he’s enjoyed guiding the companies’ growth.

It’s long been Bob’s personal goal to see the growth and continued expansion of the management team.