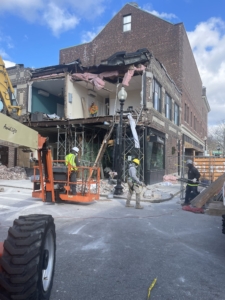 Isaac Blair provided emergency shoring to prevent the total collapse of a two-story building in Roslindale Square following a car crash that compromised the structural integrity of the building.

Early on December 18, 2022, a car travelling at a reported 70 mph crashed into a block of stores on Corinth Street, striking a structural support beam and causing part of the second floor and the façade from two levels to collapse onto the car and walkway.

Upon arrival, the Isaac Blair team acted quickly to install a shoring tower and remove the car from the scene before installing multiple additional towers, post shores and wood planking to stabilize the building and prevent it from total collapse. Isaac Blair worked in conjunction with Federal Environmental Group, a licensed contractor specializing in asbestos surveying and removal, to confirm the affected area was safe prior to performing work. Mayor Michelle Woo, who was also on site following the incident, said to reporters that she was “grateful for the quick response of all of our first responders.”

In a news interview with WCVB Channel 5, Isaac Blair President Lou Giunta said that the impact of the small car’s damage was unbelievable, “like a train hitting the building.”

The shoring will remain in place for several months as construction work continues to restore the site and get the affected small businesses back up and running. 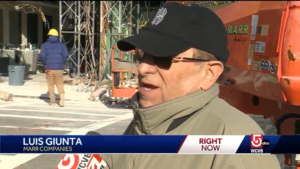