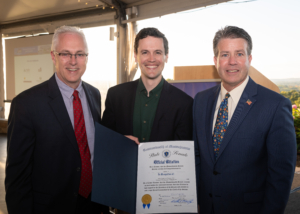 Massachusetts senator Walter Timilty (right), alongside ASM’s outgoing president Peter Gormley (left), congratulated Jeffrey Marr Jr. on being sworn in as president of ASM and presented him with an official citation from the Massachusetts State Senate.

Jeffrey Marr Jr. was elected President of the Associated Subcontractors of Massachusetts (ASM) for the 2021-2023 term at the ASM Biennial Dinner. The event took place Wednesday, October 13, 2021 at Granite Links Golf Club in Quincy and included the election of the ASM Board of Directors and Officers.

Jeff is Vice President, Business Development for The Marr Companies. A graduate of Boston College, he is active in the community serving on the Board of Directors for the Boston Preservation Alliance (BPA) and on the Employer Advisory Council at Building Pathways. He is a longtime supporter of the Boys and Girls Clubs of Dorchester and the Rodman Ride for Kids. Jeff is the first member of the sixth generation of the family-owned business to begin his career with the company.