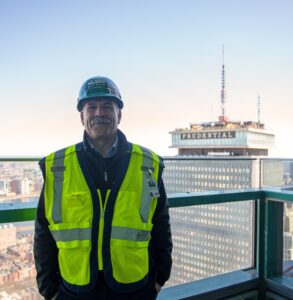 Tom McCafferty: At the Top of His Field

A steadfast fixture at Marr since 1990, Tom McCafferty has all the traits a business owner could hope for in an employee; he is amiable, dependable, knowledgeable, trustworthy, consistent, experienced, and 110% committed. The Marr family sure got the real thing when they brought Tom McCafferty on board.

Hired as the Sales Representative for the Boston/Boston South territory of the Aerial Lifts Division, Tom already had 10 years of experience in the rental equipment industry when he started at Marr. Having worked for Abbott Equipment, Duane Corporation and Action Equipment, Tom arrived with a robust resume in hand.

With what some would call natural salesmanship, Tom applied his inherent talent and skills to benefit Marr. From his earliest days, Tom worked to make the Marr fleet as productive as possible. “Tom has consistently proven to be a successful manager and mentor to his sales team and those around him”, says Jeff Marr, Sr. “His rise to becoming a valued officer of the company has been demonstrated by his passion and commitment to a high standard in everything that he does.”

Promoted to Sales Manager in 1998 and appointed Vice President in 2005, Tom is well deserving of the recognition he has received. The effort he applies to what he does for his division shows up in the numbers it produces year after year. Jeff Marr, Jr. echoes his father’s sentiment towards Tom and adds, “Tom clearly loves what he does and proudly represents Marr whether on a jobsite, attending an industry event or hosting a customer tailgate at a Patriots game.”

Part of Tom’s success is due to the time and attention he provides his customers. He is committed to knowing their needs. That trait, combined with his knowledge of what is current in the industry, has made him a terrific asset for The Marr Companies.

Originally published in the November/December 2020 issue of The Marr Mirror, a publication for the employees and friends of The Marr Companies.