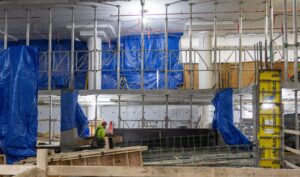 Shoring systems were installed on each level of the garage to support the construction of a new ramp system. 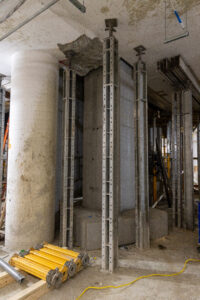 Marr shoring supports the cutting, demolition, and removal of structural columns in the Landmark Center garage.

Located at the intersection of Park Drive and Brookline Avenue in the heart of The Fenway is The Landmark Center. Built in 1929 for Sears Roebuck and Company Mail Order Store, the cast in place concrete structure served as a warehouse and distribution center for nearly 60 years before it was redeveloped into the mixed-use building it is today. Currently, The Landmark Center consists of an 8-story main structure with a 14-story tower featuring space for retail, offices, a movie theater, food hall and more. The interior design reflects the historic art deco exterior of the original building, which is listed on the National Register of Historic Places.

The building is now undergoing further expansion as part of the Landmark Center Project and includes the addition of a 14-story tower to be built partially over the existing garage. To accommodate the new tower, the existing garage ramps, located on Fullerton Street, are being relocated into the interior of the garage to make way for the new construction. Daniel Marr & Son (DM&S), contracted by steel fabricator Cives Steel, is installing new structural steel framing to support construction of the new ramp system, which involves creating new openings in the garage’s concrete slabs and the removal of existing columns.

Working in coordination with DM&S steel installation on the upper parking level and working for demolition contractor JDC Demolition, Marr Scaffolding Company’s (MSC) Shoring Division is shoring the slabs on four parking levels for the cutting, demolition and removal of structural columns. Since June, Marr has installed over 360 heavy duty post shores along the new openings created for the relocated ramp system. A combination of two shoring systems, Mass 25 and GASS shoring, is being installed in exact vertical alignment with the posts on each floor to safely distribute the cumulative load down to the foundation. MSC’s Aerial Lifts Division has provided scissor lifts and lulls for the transfer of equipment, and Marr Crane & Rigging has provided rigging support for heavier structural materials.

Marr’s work is roughly 60% complete at this time with steel work slated to wrap up at the end of December and shoring to be dismantled in January. In the weeks ahead, DM&S and MSC will continue to carefully coordinate the installation of steel and shoring so each specialty can work at maximum efficiency. Suffolk is the General Contractor.