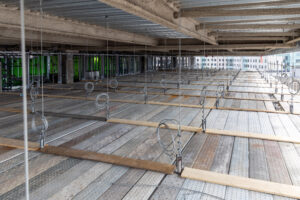 At MIT’s Site 3 building project (238 Main Street, Cambridge), Marr Scaffolding Company’s Scaffold Division has contracted with Karas & Karas Glass to develop a solution for worker access at a 12-story addition currently under construction in Kendall Square. The access will enable Karas to install an aluminum panel system to the underside of a 7th floor cantilevered section, as well as provide access to other trades for fireproofing, electrical work and piping.

Considering various factors, including the cantilever being approximately 75-feet above ground and concurrent work being done on lower floors, Marr’s in-house engineers worked closely with Karas and GC Turner Construction to establish a plan that mitigated these concerns. On the sixth floor below the cantilevered section, a five-man scaffold crew built a 40’ x 120’ systems scaffold work platform, known as a dance floor. The platform was securely suspended from 130 hangers that clamped into Aluma beams supported by structural steel on the 7th floor. Marr’s Aerial Lifts Division provided a telescopic boom lift to assist in the installation of the hangers and scaffold, which were strategically placed to accommodate the dimensions of the aluminum paneling to be installed.

Despite challenges brought on by the building’s unique architectural design and the simultaneous work of multiple contractors, Marr safely installed the staging on schedule. The platform will remain in place through the end of the year.

The 12-story addition will offer commercial laboratory and office space and will connect to the existing building via a five-story atrium. Marr’s Aerial Lifts Division installed four suspended scaffold work platforms, 160-feet in length, for Karas to install glass on one side of the atrium. The platforms will remain in use for a couple of months as work continues.