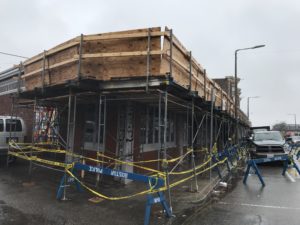 On Sunday afternoon, November 4th, City of Boston’s Commissioner of Inspectional Services William Christopher Jr. called Isaac Blair, Marr’s specialty shoring company, to 76-85 Harvard Ave in Allston where a storefront’s parapet partially collapsed onto a sidewalk, injuring two pedestrians. Responding to the emergency, Isaac Blair assessed the damage and immediately brought in an excavator to remove debris on the street, as well as the remaining masonry that was balanced precariously on the edge of the building.

The following morning, the remaining portions of the parapet along Harvard Avenue, as well as a portion that wrapped around the building down a side alley, were thoroughly inspected. As a result, another 100 feet of parapet was removed, along with some signage, and the materials were sent to storage at Isaac Blair’s Warehouse in Canton. Further examination of the parapet revealed that a combination of its materials – a block stone layered over brick – and its size – 4 feet high by 1.5 feet thick – overhanging the storefront were some of the factors that lead to its collapse more than 100 years after it was built.

To protect pedestrians walking on Harvard Ave and facilitate repair work by General Contractor ZVI, Isaac Blair designed and erected 150 feet of sidewalk brow on Harvard Avenue and another 100 feet down the alley. Per the city of Boston’s requirements, the sidewalk brow was uniquely constructed with a capacity of 150 pounds per square foot, which can sufficiently handle the load in case of further deterioration and collapse. Construction of the brow was completed within a week after the incident and is expected to remain in place until next Spring after repairs have been made.