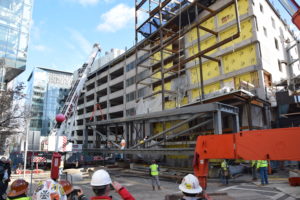 DM&S installs a 115-ton, preassembled section of the pedestrian bridge. 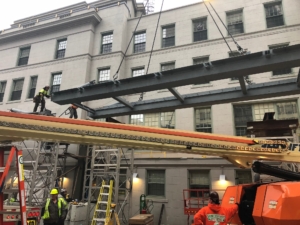 Boston Children’s Hospital is building a pedestrian bridge at the intersection of Longwood Avenue and Blackfan Street, Boston.  The bridge will provide direct pedestrian access between the Patient and Family Parking Garage and a new lobby above the main hospital’s entrance, making hospital trips safer and more convenient for patients and visitors.  Working for steel fabricator Cives Steel and General Contractor Suffolk Construction, Daniel Marr & Son (DM&S) assembled and installed the bridge’s three separate sections over two weekends in November and December 2018.

During the first weekend (November 16-18), DM&S installed section one of the bridge, which consisted of 115 tons of steel spanning Longwood Avenue, using Marr Crane & Rigging’s (MC&R) 300-ton Liebherr crane and Hallamore’s 600-ton Terex crane.  DM&S spent two weeks preassembling section one on site before it was moved into position on the street via a tandem crane pick and then hoisted into its final position using the 600-ton crane.  Due to severe site and time constraints to set the steel in place, significant pre-planning was required to execute this critical lift.  The work had to be completed successfully in a limited timeframe, as a portion of Longwood Avenue was temporarily closed, requiring ambulances and other traffic to be rerouted.  With 20 ironworkers and four crane operators working in shifts starting Friday at midnight through Sunday afternoon at 4:00 pm, Marr successfully completed the first installation.

The second weekend (December 14-16), DM&S was back on site to assemble and install the remaining two sections of the bridge between Friday night and Sunday afternoon.  While Longwood Avenue did not shut down for this operation, the hospital entrance did close, thus scheduling the installation with the hospital and the resultant rerouting of traffic were important factors to address.  Sections two and three of the bridge girders were set in place by MC&R’s 300-ton Liebherr crane and were assembled at their final elevations while temporarily supported by 14, 100 kip Hi-Lite shoring towers erected by Marr Scaffolding Company (additional shoring was erected under section one for finishing work).  Approximately eight precision crane picks were required to complete the installation. A variety of Marr 40-foot boom lifts were on site supporting the installation.  Additionally, Marr’s specialty shoring company Isaac Blair assisted with wood dunnage needed to support the bridge on the sidewalk and street.  Concrete ballast blocks aided in the temporary bracing of the bridge.

By mid-January, DM&S completed all necessary welding and decking on the 250-ton, 250-foot pedestrian bridge connecting the hospital to the parking garage.  The bridge is expected to be open for use by next fall.

The successful installation of this pedestrian bridge soundly represents the planning and coordination that takes place among Marr’s business units and with a variety of interested parties included in a project such as this.  Working diligently with the owner, the neighborhood, Suffolk Construction and others brought about the desired result for Boston Children’s Hospital.