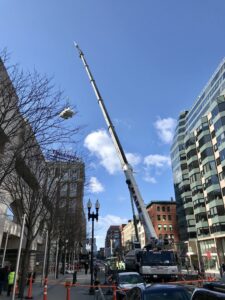 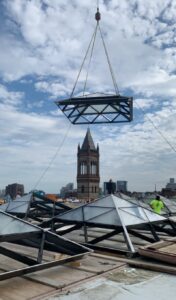 Over the last 125 years, the McKim Building on Boylston Street in Copley Square has undergone many renovations and improvements. Over nine months, from January to September 2020, Marr Crane & Rigging (MC&R) has performed weekend crane work for GC Northern Contracting, Canton, MA, and longtime roofing customer, Titan Roofing, Quincy, MA. Marr Crane & Rigging carefully developed a pick plan and provided crane services for the replacement of the roof and the installation of new skylights.

Moving materials up and down from the roof level in the heart of Back Bay on weekends was no small task. Working closely with Boston Traffic/Public Works, MC&R’s project team developed a plan to partially close Boylston Street to allow for the setup of a 90-ton crane for Titan’s roof work. MC&R was limited to working on Saturdays, 18 in total.

While the roof replacement was a large part of the project, Northern Contracting was tasked with replacing the nine skylights located at the center of the McKim Building. They resemble glass pyramids and measure 20’ x 20’ at their base, with each weighing an impressive 6,000 lbs. with the glass installed. The empty skylight frames were hoisted to the roof first and in separate lifts, additional new frames with two rows of glass were lifted into place.

Given their location at approximately 150’ from the McKim roof’s edge on Boylston, MC&R utilized its 300-ton Liebherr crane to make these larger picks. With 236’ main boom and 72’ swing-away jib, Marr’s crane operator and rigging team were able to reach these glass assemblies. Not a simple task, but MC&R was successful week after week.